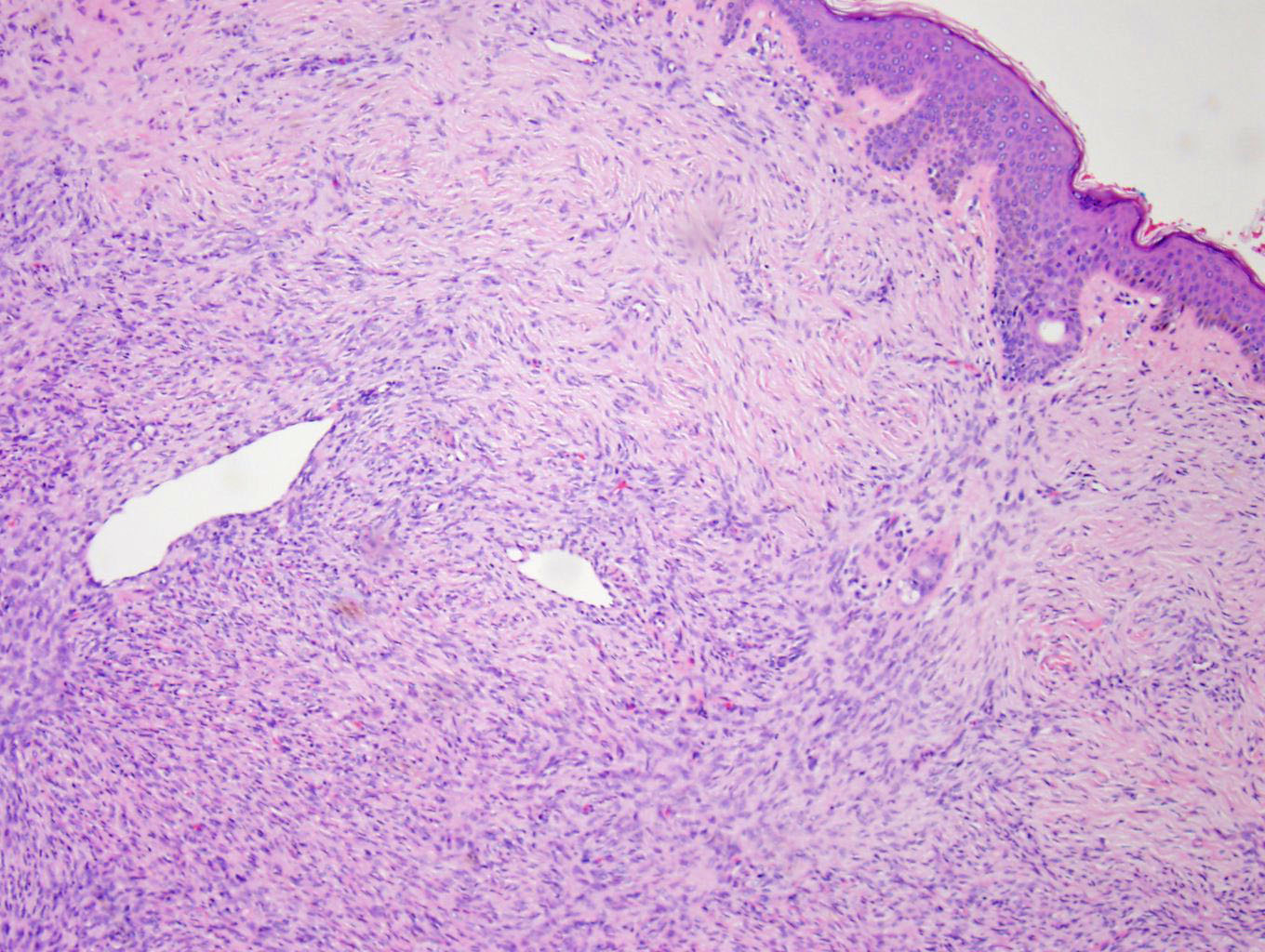 A proliferation of spindled cells is seen in the dermis. Note that the overlying epidermis does not exhibit hyperplasia which is usually seen in dermatofibroma.

One of the key features of DFSP is that it infiltrates into the subcutaneous fat. This is NOT seen in dermatofibroma.

A tightly knit, storiform proliferation of monotonous spindle cells is characteristic of DFSP. In comparision, DF usually has a looser architecture admixed with histiocytes (which are not usually seen in DFSP).

CD34 is positive in DFSP, unlike in DF. While not 100% sensitive, the vast majority of DFSPs stain with this marker, either diffusely or focally.

Dermatofibrosarcoma protuberans (DFSP) most commonly arises in the trunk or proximal extremities. Histologically, there is storiform proliferation of spindle cells and diffusely infiltrate into the subcutaneous fat. Variants include giant cell fibroblastoma, myxoid DFSP and pigmented DFSP "Bednar tumor". Fibrosarcomatous change may be present in 15% of cases.

Of note, over 90% of DFSP exhibit an unbalanced translocation involved PDGFB on chromosome 22 and COL1A1 on chromosome 17. This t(17;22) tranlocation upregulates PDGFB as COL1A1 is a gene promoter (Busam, Courtney).

In comparison to dermatofibroma, DFSP has infiltrative growth into underlying fat which is not seen in DF. Furthermore, epidermal hyperplasia, histiocytes, collagen trapping are features of DF and less so of DFSP. Thus, a tight monotonous storiform pattern is present in DFSP and DF consists of a looser pattern with admixed with histiocytes.

Initially, a thickened appearance is seen, and eventually may develop into an ulcerating mass. It generally affects people between age 20 and 50, although pediatric cases have been identified. Blacks are more commonly affected.

These tumors demonstate a slow infiltrative growth and little metastatic potential but a high tendency to recur locally after surgical excision.

→Exhibits the same translocation as in giant cell fibroblastoma, which is seen in boys in their first decade.