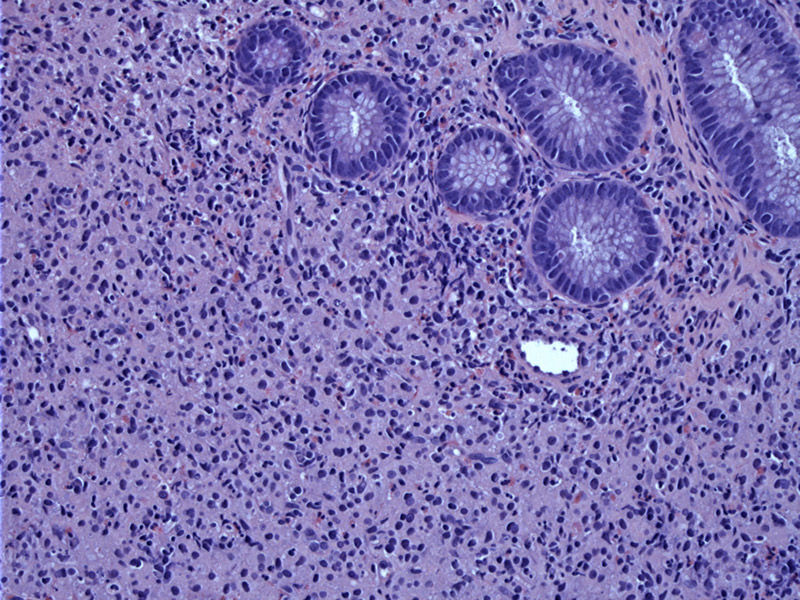 Colonic glands are seen overlying sheets of inflammatory cells with a moderate amount of cytoplasm.

Higher power of the underlying sheets shows numerous histiocytes admixed with lymphocytes. The arrow indicates a classic Michaelis-Guttman body with its targetoid appearance.

The same inflammatory process is seen between the surface glands within the lamina propria. Often as in this example, the overlying mucosa remains intact, but may present as a polypoid lesion.

PAS highlights the Michaelis-Gutmann bodies (arrow), which have a round dense or targetoid appearance due to concentric laminations. Other stains that highlight them include the Von Kossa stain (for calcium) or iron stains. They are also Alcian blue positive.

Malakoplakia (spelled also malacoplakia) is most often described in the bladder, but can occasionally be seen in a variety of organs such as the appendix, colon and skin.

Macroscopically, raised whitish mucosal plaques give rise to its name. Microscopically, there is an infiltrate of foamy macrophages with granular cytoplasm, interspersed lymphocytes and occasionally multinucleated giant cells. Bacteria are incompletely digested due to a defect in the degradative function of the macrophage and thus, accummulate in the histiocytes (Kumar, Iacobuzio). Michaelis-Gutmann bodies, round lamininated structures with a targetoid appearance, are typically present. These bodies are due to deposition of calcium in enlarged lysosomes (Kumar) and thus, can be highlighted with iron or calcium stains.

Malakoplakia is related to chronic bacterial infection (often E. Coli) and is most frequently seen in immunosuppressed patients.

Some 40% of malakoplakia cases involving anatomic sites other than the GU tract are known to be been associated with immunosuppression (Long). Symptoms of colonic malakoplakia are not specific, and include rectal bleeding, diarrhea, abdominal pain, and fever most often.

Treatment options include surgical resection, or medical therapy such as bethanechol, a cholinergic agonist, to raise intracellular levels of cyclic guanosine monophosphate in macrophages. Other drugs employed include antimicrobial drugs, such as trimethoprim-sulfamethoxazole, rifampicin, or,