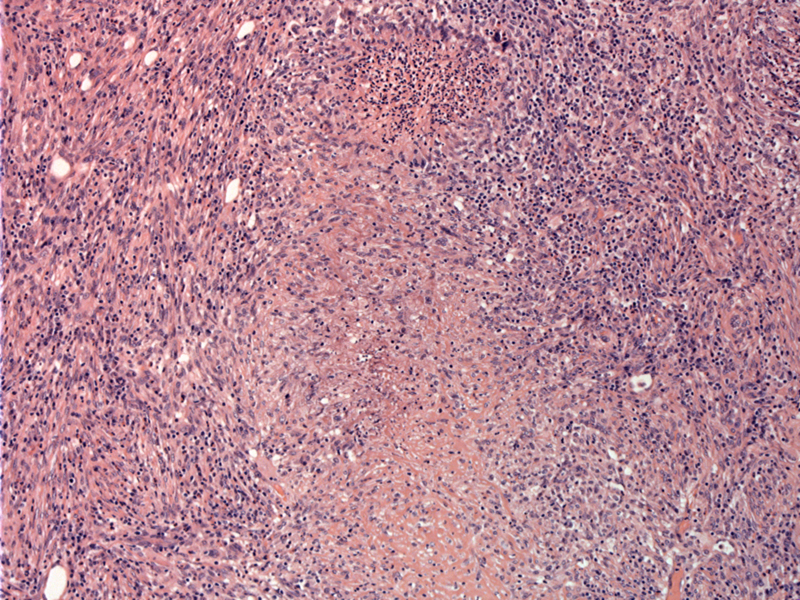 Necrosis with surrounding pallisading histiocytes is seen in the top image. In the following images, you will see that there is no clear demarcation between the granulomas, inflammatory infiltrate and normal pulmonary parenchyma. It all blends together, and this is characteristic of this disease.

Brisk inflammation and geographic necrosis with many neutrophils can be appreciated.

Spindle and epithelioid cells intermingle with a mixed inflammatory infiltrate. Microabscesses (collections of neutrophils) can be seen. Image

A higher power with of a granuloma with a necrotic center. The histiocytes pallisade around the periphery.

Bronchial epithelium is seen to the right, almost obscured by the robust inflammation. Note the presence of multinucleated giant cells.

This is a second case of Wegener Granulomatosis that is more acute than the previous case. A lovely giant cell (nuclei forms a horseshoe) is seen on the right.

A basophilic necrotic area is seen, also described as dirty necrosis due to the presence of debris and neutrophils. Destruction of lung parenchyma is marked.

What is likely a vessel shows fibrinoid necrosis (yellow arrow).

Wegener granulomatosis is a systemic disease characterized by granulomatous inflammation in vessels and necrotizing granulomas in the pulmonary parenchyma. These lesions are primarily found in the upper respiratory tract (ear, nose, throat, sinuses) and lower respiratory tract (lung) and kidney. Other parts of the body such as eye, skin and heart can also be involved.

WG is likely T cell-mediated, and the presence of anti-neutrophil cytoplasmic antibodies (ANCA) in most WG patients further supports the immunologic genesis of this disease. Briefly, c-ANCA exhibits cytoplasmic staining on immunofluorescence with proteinase 3 being the target; p-ANCA exhibits perinuclear staining with myeloperoxidase as the target (Zander).

The microscopic features of WG are as follows (Cheng, Kumar, Zander):

(1) Vasculitis of small and medium sized arteries and veins. Often, there is eccentric involvement of the vessel wall. The inflammatory infiltrate consists of lymphocytes, macrophages, plasma cells, neutrophils and rare eosinophils. A granulomatous reaction can sometimes destroy the vessel wall.

(4) Multinucleated giant cells may be scattered within the vasculitis or background infiltrate.

WG is a rare condition that peaks in the 4th and 5th decades with a male predominance. The classical clinical triad is sinusitis, pneumonia and glomerulonephritis. Patients with WG who do exhibit this triad (ie. just pulmonary involvement) are said to have "limited WG" (Kumar, Zander).

The most common features include pneumonitis with bilateral nodular and cavitary infiltrates (95%), chronic sinuisitis and epistaxis (90%), mucosal ulcerations in the nasopharynx (75%), and renal disease (80%) as evidenced by hypertension and edema (Kumar). Skin rashes, weight loss, fever, and arthralgias may also be present.

c-ANCA positivity is found in ~90% of patients, however, cases of p-ANCA or negative ANCA tests have been reported. c-ANCA is also a good marker of disease activity and can be used to monitor response to therapy.

Immunosuppression with steroids and cyclophosphamide will result in remission in 75% of patients. Relapse rate, unfortunately, is 50% (Zander). If untreated, WG is deadly and 80% of patients die within 1 year (Kumar).