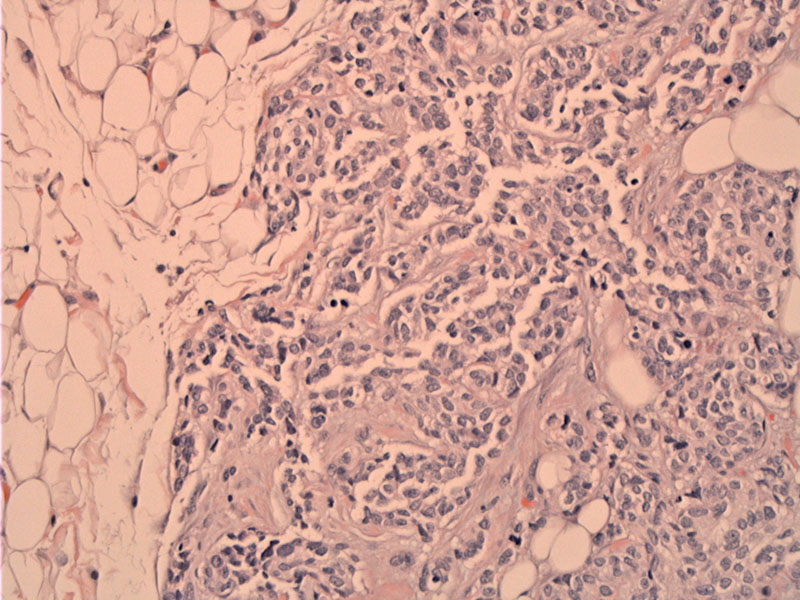 Islands of neoplastic cells arranged in nests and trabeculae are separated by desmoplastic stroma.

Yet another view of islands of neoplastic small round blue cells delimited by a dense desmoplastic stroma.

Desmoplastic small round cell tumor (DSRCT) arises in the peritoneum, although rare cases in the pleura and nonserosal locations have been described. DSRCT is a member of the family of small round cell tumors which include Ewing sarcoma, primitive neuroectodermal tumor (PNET), rhabdomyosarcoma, neuroblastoma, lymphoma, synovial sarcoma and blastemic Wilms tumor.

The characteristic molecular alteration associated with DSCRCT is the fusion of the Ewing sarcoma gene (EWS) on chromosome 22 to the Wilms tumor gene (WT1) on chromosome 11, leading to the reciprocal translocation t(11;22)(p13;q12), resulting in the EWS-WT1 fusion gene (Kumar, Fletcher).

Grossly, DSRCT can be plaque-like or nodular. The outer surface is usually smooth and bosselated with a firm, grey-white cut surface. Necrosis and myxoid change may be present. These tumors can reach enormous proportions (up to 40 cm) and peritoneal studding may be present. Direct invasion into organs are occasionally seen (Fletcher).

The tumor is thought to arise from a mesothelial progenitor gene capability of multilineage differentiations, thus, DSRCTs can express epithelial (EMA, LMWCK), neuronal (NSE, synaptophysin), and muscle (desmin, vimentin) markers. WT1 staining (targeted toward the C-terminus of the WT1 protein) is also positive (Rosai, Fletcher). The best confirmatory test is via PCR to demonstrate the EWS-WT1 translocation t(11;22)(p13;q12).

Interestingly, antibodies against MIC2 (CD99) antigen can be positive, but the staining pattern is usually cytoplasmic, rather than the membranous staining seen Ewing sarcoma/peripheral neuroectodermal tumor. A hallmark of EWS and PNET is the expression of CD99/MIC2, a cell surface glycoprotein (Letson).

Surgical resection combined with chemotherapy and radiation may prolong survival in some but overall prognosis remains poor.

→Thought to arise from a mesothelial progenitor cell with capacity for multilineage differentiation.

→Predilection for the serosal membranes of young adults.

Letson GD, et al. Genetic and Molecular Abnormalities in Tumors of the Bone and Soft Tissues: eMedicine. Last updated on 5/1/2001. Available at: medscape.com/viewarticle/409051