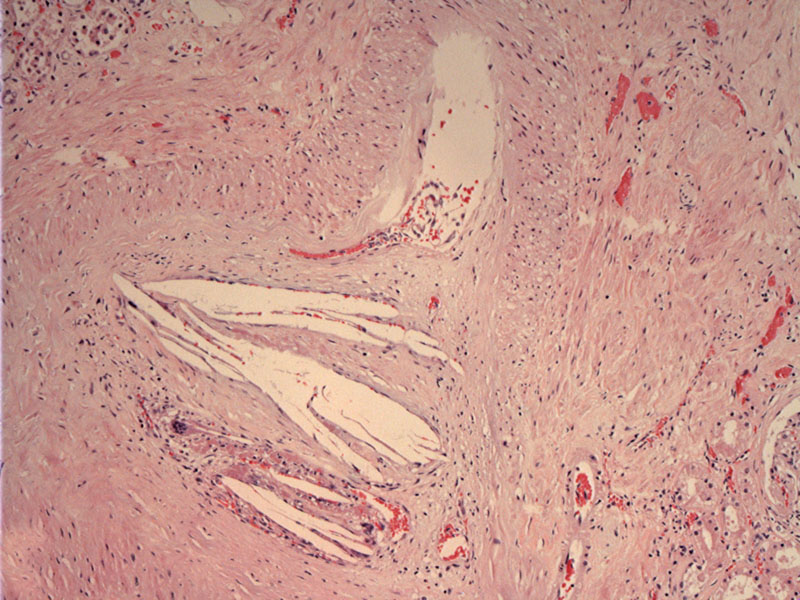 Vessel with cholesterol clefts -- the crystals themselves dissolve in the material used for histological processing, so needle-shaped spaces are seen on the slide.

The cholesterol embolus results in ischemia distal to the vascular occlusion. There is the beginnings of an acute infarct, seen as coagulation necrosis. The tubules are losing their nuclear features and becoming ghost-like.

Usually affects elderly men with a history of diffuse atherosclerosis. Presentation may be acute with abrupt and sudden onset of renal failure or a progressive loss of renal function occurs over weeks. A third form of renal atheroemboli has been described, presenting as chronic, stable, and asymptomatic renal insufficiency.

No effective treatment exists. Anticoagulants should be avoided, while various antiplatelet drugs have been tried without success. Anecdotal reports suggesting that pentoxifylline may be beneficial exist but this remains unproven (Scolari).

Outcome is variable, resulting in different degrees of renal impairment. Some only have a moderate loss of renal function while others may succumb to severe renal failure requiring dialysis. In four reports, the 1-year mortality ranged from 64% to 87% (Scolari).