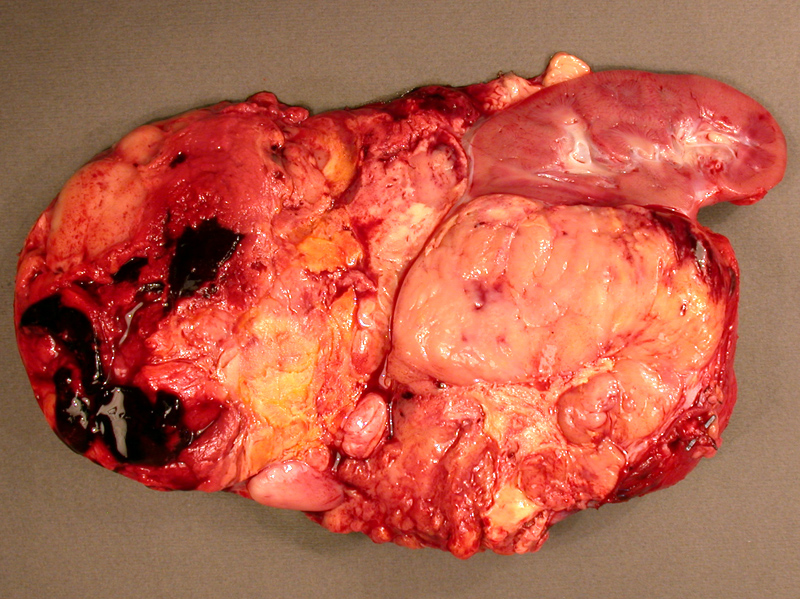 The tumor is a bulky nodular mass.
IMAGE DESCRIPTIONS

This particular ACC is a large, tan, fleshy and solid mass. Areas of necrosis, cystic degeneration and hemorrhage are common.

The tumor appear variegated, ranging from a tan-maroon to bright yellow in areas.

Microscopically, the tumor cells have a more or less uniform appearance. The cells contain a fair amount of pale to almost clear cytoplasm. From this image alone, it would be difficult to distinguish ACC from a cortical adenoma.

Necrosis is found in other regions. Confluent or widespread necrosis (when taken in combination with other findings) is supportive of a diagnosis of ACC.

Adrenal cortical neoplasms (both benign and malignant) are immunoreactive for Melan-A (seen here), as well as inhibin and calretinin. Note that not all cells uniformly stain.

Adrenocortical carcinoma (ACC) is rare neoplasm (1-2 cases per million) that tends to affect older individuals, but can also arise in children. Compared to cortical adenoma, ACC is more likely to be functional and thus associated with clinical manifestations of virilism, Cushing syndrome or hyperaldosteronism.

Inherited causes of ACC include Beckwith-Wiedermann syndrome and Li-Fraumeni syndrome. In Beckwith-Wiedemann Syndrome, 7.5% of children develop a malignant neoplasm, usually a neuroblastoma or ACC (Kumar, Cheng).

ACC is likely to be large (>20 cm), invasive, poorly demarcated, necrotic, hemorrhagic and cystic. Invasion into the adrenal vein and inferior vena cava is not uncommon (Kumar). Microscopically, well-differentiated ACC may be difficult to distinguish from adrenal cortical adenomas.

Peaks in the 4th decade. Typical presentation is due to hormone excess (virilism, cortisol or aldosterone excess) and possibly an abdominal mass. Metastasis to lung, liver and retroperitoneal lymph nodes may be present.

→Compared to adenomas, adrenal cortical carcinomas are larger and more likely to be functional.

→Inherited causes of ACC include Beckwith-Wiedemann syndrome and Li-Fraumeni syndrome.