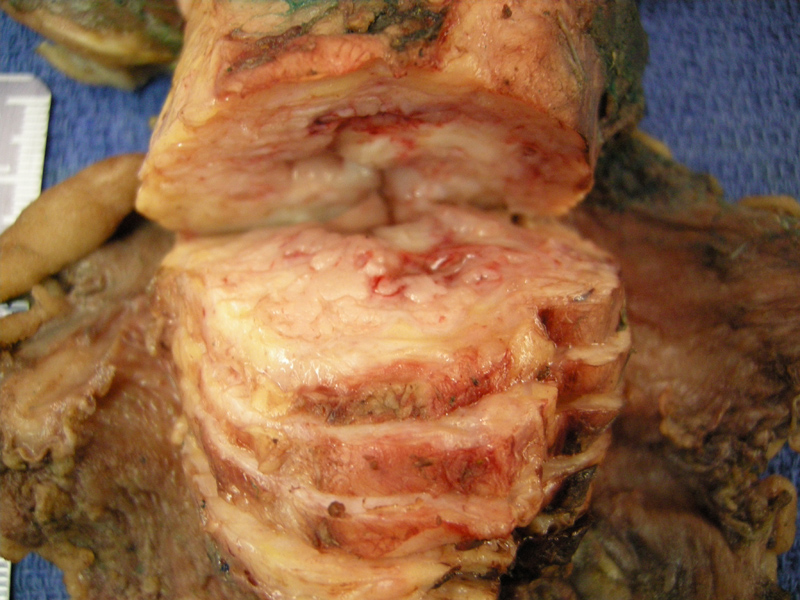 A gelatinous lesion is occupying the lumen of this dilated pancreatic duct.
IMAGE DESCRIPTIONS

This pancreas shows a dilated duct with a gelatinous appearing pale lesion occupying the lumen.

Another case shows again a dilated duct. Most IPMNs are localized but potentially they can involve the entire pancreas.

The cut section of the above pancreas shows glistening mucinous mass.

The dilated duct is lined by papillary structures and the lumen is filled with mucin. A well-developed papillae with a vascular core is present.

The tumor is involving ampulla of Vater.

Mucinous debris and mild to moderate cytologic atypia is evident compatible with at least moderate dysplasia. This type resembles the pancreatobiliary-type of neoplasm which is less common that the intestinal variety. The nuclei in general are rounder than the intestinal-type and chromatin is more open. Most IPMNs of pancreatobiliar type show high grade dysplasia.

A filiform configuration of neoplastic cells can be appreciated.

FNA usually yields abundant mucin which resembles thick colloid on this diff-quick stained slide. A mucinous cystic neoplasm may have a similar FNA appearance, but mucin contamination from the GI tract does not take on this viscous nature. Mucinous cystic neoplasms may contain entrapped histiocytes and debris, a feature typically lacking in IPMN. Furthermore, not all IPMNs contain tenacious mucin, so beware!

Scattered clusters of columnar cells with basally-situated nuclei and mild atypia are found. Prominent but uniform nucleoli are present. Note that sampling by FNA often does not detect focal areas of higher grade atypia. Epithelial cells are required for the FNA diagnosis but when scant and bland, the possibility of GI contamination is also raised.

The presence of papillary fragments supports the idea of IPMN but may be lacking in some FNAs.

Intraductal papillary mucinous neoplasm (IPMN) is a pancreatic neoplasm that arises in the ductal system and is characterized by papillary proliferations, ductal dilatation, mucin production.

The categorization of the different histologic subtypes of IPMNs is a bit confusing, but is worth noting because the subtypes have prognostic significance. In a 2004 paper, Adsay and colleagues clearly delineate the three major subtypes recognized thus far (Adsay, Yonezawa):

Adsay and colleagues examined 74 IPMNs with special attention to CDX2 (intestinal differentiation marker), MUC1 (marker of aggressive phenotype in pancreatic neoplasia) and MUC2 (marker of indolent intestinal type mucin). They found that intestinal-type IPMNs were more likely to exhibit carcinoma-in-situ (85%) or borderline atypia (15%), express CDX2 (95%) and MUC2 (92%), but not MUC1 (8%). The pancreatobiliary type were often graded as CIS (94%), express MUC1 (44%), but rarely express CDX2 or MUC2. Lastly, the pure gastric or null type were most often classied as adenomas (48%) and rarely expressed CDX2, MUC1 or MUC2 (Adsay).

What does this mean prognostically? Basically, the intestinal-type are more aggressive and more likely to have an invasive component compared to the gastric-type. The pancreatobiliary type (according to Adsay) may also be aggressive. In one review of 80 IPMNs conducted by Ban in 2006, 23% of intestinal-type IPMNs contained an invasive carcinoma in contrast to only 2% of the gastric type (Ban).

A minority (<20%) present with jaundice, a symptom which overall is more common in those with associated invasive disease. Patients with IPMNS are at increased risk for other malignancies such as those of the colorectum and stomach (Sugiyama). IPMNs have been reported in patients with Peutz-Jeghers syndrome (Su).

On endoscopy, one may see mucin extrusion from the Ampulla of Vater as IMPNs can elaborate copious amounts of mucin.

Surgical excision is usually performed. Nodal dissection is recommended for those with invasive malignancy. In some studies, asymptomatic branch-type IPMNs without mural nodules may be followed up without resection (Tanaka).

Note also, that patients with IPMNS are at increased risk for other malignancies such as those of the colorectum and stomach.

In contrast to mucinous cystic neoplasms which do not involve the pancreatic ducts, arise in body/tail of the pancreas, affect women and exhibit an ovarian-type stroma, IPMN arise in the main pancreatic ducts in the head of the gland, have a predilection for men and do not have a distinctive stroma.