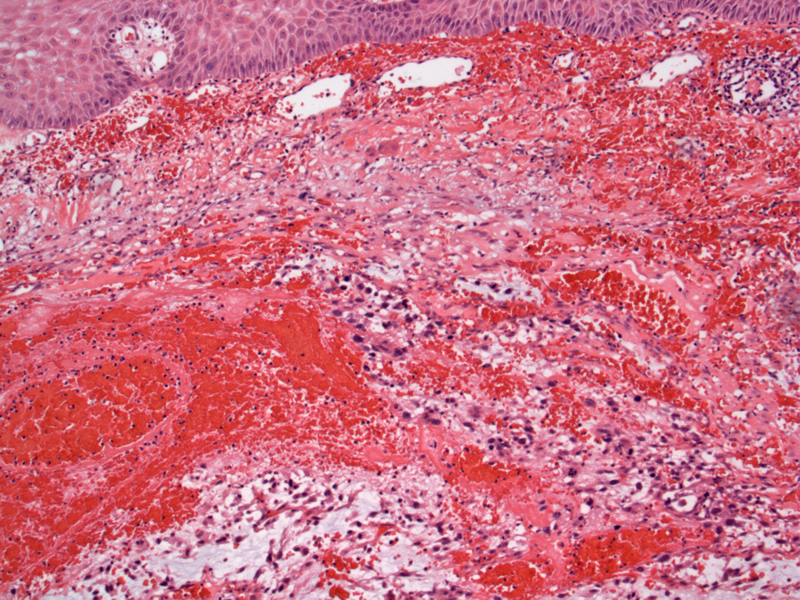 Anastamosing vascular channels contain pools of blood. This tumor is discohesive and moderate to poorly differentiated -- it is difficult to visualize the pleomorphic endothelial cells lining the vascular spaces.

Some areas can show extensive myxoid material between cords of malignant cells.

Mitotic figures, both normal and abnormal, are easily identified. See the atypical mitotic figure (almost looks like spider) in the upper left image.

Angiosarcoma, also known as malignant hemangioendothelioma, is defined as a malignant neoplasm composed of endothelial cells of blood vessels (Rosai). Usually seen in adults, angiosarcomas commonly arises in the skin, soft tissue and breast; it can also arise in a variety of other viscera including bone, liver, spleen, lung and pleura.

Cutaneous angiosarcoma can be idiopathic and is usually in the head and neck of the elderly, or associated with lymphedema (usually post removal of axillary lymph nodes during mastectomy) or post radiation therapy for benign or malignant neoplasms. Rarely, angiosarcoma can evolve from a pre-existing hemangioma or vascular malformation (including surgically constructed arteriovenous fistulas).

A red-purple plaque or nodule on the central face or scalp is characteristic; it can resemble a bruise. Histologically, anasatomosing vascular spaces "dissect" through dermal collagen bundles. The vascular spaces are lined by pleomorphic and hyperchromatic endothelial cells. Mitotic figures (both normal and abnormal) are easily identified.

Poorly differentiated lesions can present as solid growth without succinct vascular architecture, thus, IHC will be helpful in these situations. Angiosarcomas are usually positive for CD31 and CD34, however, one must be aware that poorly-differentiated tumors may lose their antigen profile (Fletcher).

Cutaneous angiosarcomas is predominantly seen in the head and neck of older adults. The other cases consist of patients with lymphedema or with exposure to radiation therapy.

Very poor prognosis with 5 year survival between 12 and 33% (Fletcher).