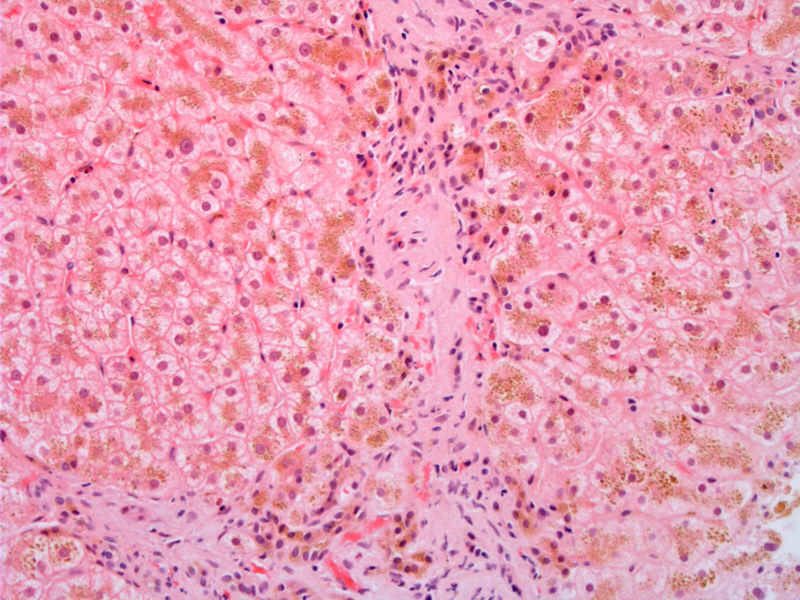 Golden-yellow hemosiderin granules are seen in the cytoplasm of hepatocytes.
IMAGE DESCRIPTIONS

Heavy iron deposition is seen in hepatocytes as golden-yellow granules in the cytoplasm.

In this separate assay, lanes 4 and 5 are heterozygous for C282Y and no one has mutations for H63D.

Hemochromatosis can be primary (inherited) or secondary (acquired). Inherited hemochromatosis is due to an autosomal recessive genetic disorder that leads to excessive iron absorption. The hemochromatosis gene (HFE) is located on chromosome 6, close to the HLA gene locus -- this gene is involved in the regulation of dietary iron absorption by intestinal epithelial cells.

The most common defect involves a cysteine-to-tyrosine substitution at amino acid 282, or C282Y. In persons of Northern European extraction, the prevalence of homozygotes is estimated to be 1 out of every 200 persons) and the prevalence of heterozygotes is approximately 1 out of every 10 persons -- thus, hereditary hemochromatosis is one of the most common genetic disorders in whites. Frequency and allele analysis suggest a Celtic origin, and there may have been a selection advantage for iron retention, hence decreased iron-deficiency.2

It is important to keep in mind, however, that the penetrance of the disease is only ~20% in homozygotes, therefore, only not everyone with the mutation manifests the disease.1 Other less common mutations include the gene H63D and S65C.

In normal adults, the total body iron ought to be 2-6 grams. In hereditary hemochromatosis, total iron may exceed 50 grams, leading to excess iron deposition in the liver, pancreas, endocrine organs (adrenals, thyroid and pituitary), heart and skin. Microscopically in the liver, iron deposits appear as golden granules in the cytoplasm in the periportal hepatocytes. As the disease progresses, the deposits appear in the rest of the lobule, including Kupffer cells and bile duct epithelium.1 Eventually, as excessive iron is hepatotoxic and stimulates the formation of collagen, fibrous septa develop and lead to micronodular cirrhosis. There is usually minimal inflammation.1

Hereditary hematochromatosis shows a male predilection, being approximately five times more common in men. Furthermore, symptoms appear earlier in men than women due to the protective effects of menstruation in women. The average age of presentation is between 40-60.