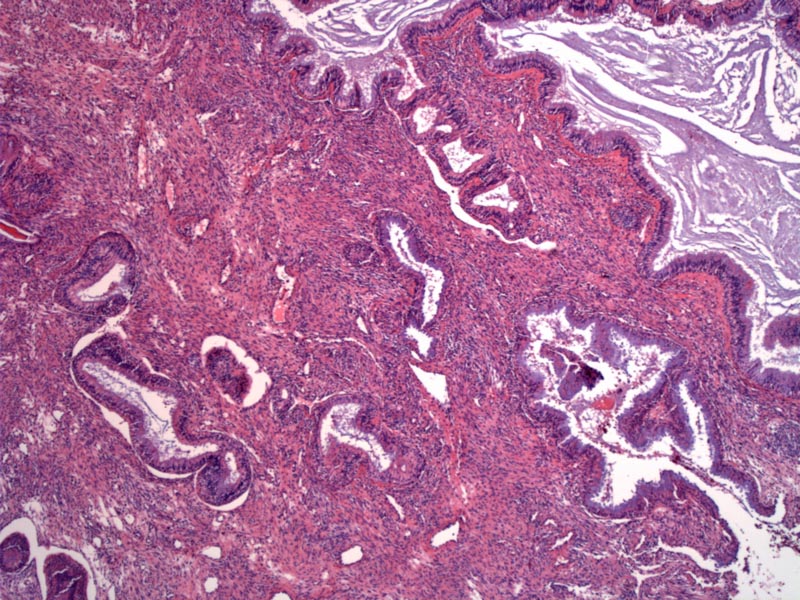 Case 1: Small to medium sized glands are lined by ciliated respiratory epithelium. The glands may be dilated as seen in this case.

The glands originate from invagination of the overlying Schneiderian membrane (seen on the upper right). An inflammed stroma separates the glands.

Hamartomas are disorganized proliferations of cells and tissues native to that particular anatomic site and unlike neoplastic proliferation, hamartomas do not have the capability to grow indefinitely (Fitzhugh). Respiratory epithelial adenomatoid hamartoma (REAH) is rare benign lesion that presents as a unilateral polypoid mass in the nasal cavity.

REAH was first described in 1995 by Wenig and Heffner in a study of 31 cases (27 male, 4 female). The most common site in along the posterior nasal septum. Other sites include ethmoid and frontal sinuses and the nasopharynx (Wenig).

REAHs are exophytic, tan-white to red-brown rubbery polypoid masses. Histologically, they are composed of small to medium sized glands lined by the ciliated respiratory epithelium. The glands are formed by invaginations of the surface epithelium; continuity with the surface can often be identified. The lining cells often exhibit mucinous gland metaplasia. A thickened basement membrane surrounds the glands. The stroma can be edema or fibrous, containing scattered seromucinous glands.

A variation of REAH is chondroosseous respiratory epithelial (CORE), which is basically a REAH with foci of chondro-osseous differentiation. These foci can appear as immature mesenchyme, cartilaginous nodules or well-developed bony trabeculae.

80% are male, with vague presenting symptoms including nasal obstruction, stuffiness, or allergic symptoms. 27 men and 4 women ranging in age from 27 to 81 years (median, 58 years)(Wenig).

The treatment is complete local excision. There are no reports of recurrent, persistent, or progressive disease, in the literature. It is important to recognize this lesion and distinguish it from morphologically similar lesions such as inverted papilloma or sinonasal carcinomas, which are more threatening and invasive lesions (Fitzhugh).