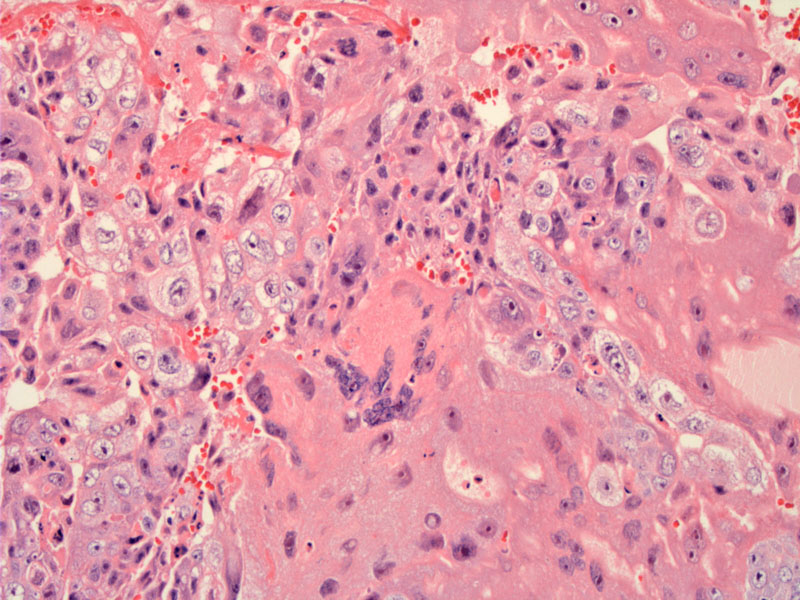 Another area demonstrates an almost spindled confluent growth of the neoplastic cells.

Malignant cells with enlarged pleomorphic nuclei is seen on the left and some benign cells are seen on the right.

From yet another case, this is a hysterectomy showing the tumor interface. Note the myometrial fibers (on the left) heavily infiltrated by chronic inflammatory cells.

Here is a more convincing area of invasion, with pleomorphic trophoblastic cells dissecting through the muscle fibers (spindled pink cells) of the myometrium.

Gestational choriocarcinoma is a malignant proliferation of trophoblastic cells derived from a normal or abnormal pregnancy. In the US, the incidence is approximately 1 in 20,000 or 30,000 pregnancies. Of interest, it is much more common in some African countries such as Nigeria, where the incidence in some areas is as high as 1 in 2500 pregnancies!1

Grossly, a mass that is variably yellow-white, fleshy and hemorrhagic is seen in the uterus. Due to its propensity to grow rapidly, areas of infarction, hemorrhage and necrosis are common. On cross section, the tumor will be seen invading the myometrium, and sometimes, extending into the uterine serosa and adjacent structures.

Most cases arise in the uterus, however, choriocarcinoma can be found outside of the uterus in ectopic pregancies. Women will complain of spotting and discharge, but a mass is usually not palpable. The neoplasmsis usually discovered on an endometrial biopsy.

The tumor can occur during the pregnancy or several months after pregnancy -- intervals as long as 14 years have been reported!2 Radiographs often reveal metastatic lesions in the lung and bones, leading to symptoms of hemoptysis and neurologic derangments. hCG levels are highly elevated. Exceptionally, the tumor may produce very little hormone (usually as a result of extensive necrosis).

After determining the presence or absence of metastases, patients are stratified into high and low risk groups depending on a variety of factors. Non-metastatic and low risk groups may experience cure with single agent chemotherapy (typically methotrexate), while multi-agent chemotherapy (etoposide, methotrexate, actinomycin-D, cyclophosphamide, vincristine) is employed in high risk patients. Radiation may be added to treat brain metastases. Hysterectomy may have a role in patients not desiring fertility preservation. HCG levels are used as markers for treatment response and recurrance.

Widespread and rapid metastasis is characteristic of this tumor -- most frequent locations include lungs (50%), vagina (30-40%), brain and liver. Fortunately, remission rates using chemotherapy are upwards of 100%. Of note, nongestational choriocarcinoma are much more resistant to chemotherapy.