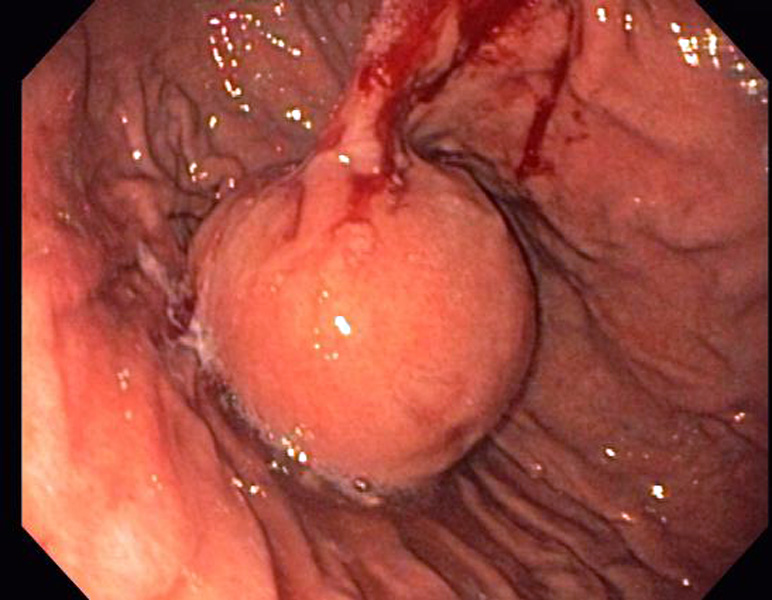 The endoscopic image shows a submucosal nodule without ulceration of the overlying mucosa.

This resection untreated GIST shows a fleshy solid pale tan tumor underlying the normal mucosa. Overall, grossly GISTs may be solitary or multifocal, ranging in size from 1 to 20 cm. The neoplasm is well-circumscribed, but not encapsulated. Some protrude into the lumen with an overlying attenuated mucosa which may ulcerate. Others protrude on the serosal side of the gastric wall. The cut surface is tan, bosselated, rubbery and even a bit glassy. They usually do not exhibit the whirling smooth muscle pattern of leiomyomas. Hemorrhage, necrosis or cystic changes can be seen in a large tumor.

An intestinal GIST post-Imatinib therapy is presented. All that remains is a hemorrhagic cavity consistent with an exuberant treatment response.

A spindled morphology, consisting of fascicles of fusiform cells, is very common. Microscopically, GIST has a broad spectrum of histologic features. Most are spindle cell tumors as in this example, whereas others are epithelioid -- hwile others have a mixture of both morphologies. Those tumors with PDGFRA mutations show a predilection for gastric GISTs with epithelioid morphology. Cells are separated by a variable amount of stroma that may undergo myxoid change or hyalinization.

This is a post-treatment GIST c-kit stain. After Imatinib therapy, some GISTs as well as exhibit a more epithelioid morphology as seen here -- loss of c-KIT and CD34 immunopositivity have been described as well (Fletcher).

GIST can also show an epithelioid appearance, with distinct polygonal cells with a moderate amount of cytoplasm.

The corresponding c-kit in the epithelioid variant is, as expected, also positive. It is not as strongly positive compared to the previous image.

Another example of epithelioid morphology is shown here. Note the round nuclei and abundant cytoplasm.

In this malignant GIST, normal gastric mucosa is seen on top and tumor proliferation is seen on the bottom.

Borderline features of increased cellularity and mitotic activity (same tumor as above)are noted. The size of the tumor was also quite large, measuring 9 cm.

Yet another example of GIST which exhibits peculiar sclerosis and hyalinization of the stroma.

GISTs (Gastrointestinal Stromal Tumor) are the most common mesenchymal neoplasms of the GI tract.

Because GISTs often looked like swirling fascicles of smooth muscle cells under the microscope, they were historically classified as leiomyomas or leiomyosarcomas. However, studies have shown that GISTs are unrelated to smooth muscle cells. The cell of origin is the interstitial cell of Cajal or their precursor stem cells, which are so called gut pacemaker cells that control GI peristalsis (Kumar, Fletcher).

Approximately 85-90% of GISTs have c-kit mutations and of those that are negative for c-kit mutations, 35% exhibit PDGFRA mutations. C-kit (also known as KIT or CD117) and PDGFRA (platelet derived growth factor receptor alpha) are receptors which contain the enzyme tyrosine kinase. Mutations in these receptors lead to constitutive activation of the tyrosine kinase signaling pathway, thus permitting uninhibited cellular proliferation (Kumar). KIT and PDGFRA mutations are mutually exclusive in the majority (but not all) of cases (Miettinen).

GANT (gastrointestinal autonomic nerve tumors) is a variant of GIST and stains for NSE, S100, synaptophysin, and chromogranin. It has EM features of autonomic neurons, including cell processes with neurosecretory type dense core granules and arrays of microtubules.

In terms of IHC, the hallmark is expression of c-kit protein (85-90% of cases). Staining pattern can be membranous, cytoplasmic or perinuclear dots. Some are immunoreactive for CD34 (70-80%) and SMA (20%). About 5-10% of GISTs are immunohistochemically negative for c-kit. These tumors are diagnosed based on their typical clinical and histopathologic features and should not be confused with smooth muscle tumors even if they express SMA. Note that C-kit negative GISTs have exhibit the following features: 1. exhibit an epithelioid morphology, 2. arise in extragastrointestinal locations and 3. harbor PDGFRA mutations (Kumar, Fletcher).

Most commonly occurs around age 55-65 with equal gender distribution. ; less common in younger age groups. There is no gender predilection. Most commonly located in the submucosa (stomach 50-70%, jejunum and ileum 20-30%, colon and rectum (5-15%) and esophagus (<5%); rare cases in the omentum or mesentery (Mukherjee).

Surgical excision whenever possible. GISTs are resistant to standard chemotherapy and radiation. The chink in their armor lies in their gain-of-function mutation of the KIT proto-oncogene, which occurs in up to 90% of GISTs. This mutation results in constitutive activation of tyrosine kinase, leading to aberrant cell division and tumor growth. The drug Imatinib selectively inhibits this tyrosine kinase activity associated with KIT.

In regards to the effectivenes of Imatinib (tradename Gleevec), it should be known that there are four different regions of KIT identified as mutation sites in GISTs. In decreasing order of frequency, they involve exon 11, exon 9, exon 13, and exon 17. While most Kit-mutant proteins are sensitive to Imatinib, those with exon 17 Kit-mutants are primarily resistant, and exon 9 Kit-mutants are less sensitive than exon 11 mutants (Heinrich).

Median survival for localized disease is 5 years compared to only 10-20 months for metastatic or recurrent disease. Gastric GISTs appear to have improved prognosis compared to extragastric GISTs (Mukherjee). The two most important prognostic determinants are size and mitotic activity, and in fact, Fletcher proposes a scheme which stratifies the malignant potential of GISTS by employing size and mitotic activity. For example, less than 2 cm and less than 5 MF per 50 HPF is considered to be very low risk. Malignant potential increases as either size OR mitotic activity increases (Fletcher).

Other histologic features that have been linked to aggressive behavior include mucosal invasion, tumor necrosis, cellularity, nuclear pleomorphism, and epithelioid histology.

Those exhibiting PDGFRA mutations may have an improved prognosis (Fletcher). A growing body of evidence is revealing that prognosis of GISTs and their response to Imatinib depends on the specific type of mutation in exons 11, 9, 13, 17 of KIT-mutated GISTS and exons 12, 14, 18 of PDGFRA-mutated GISTs.