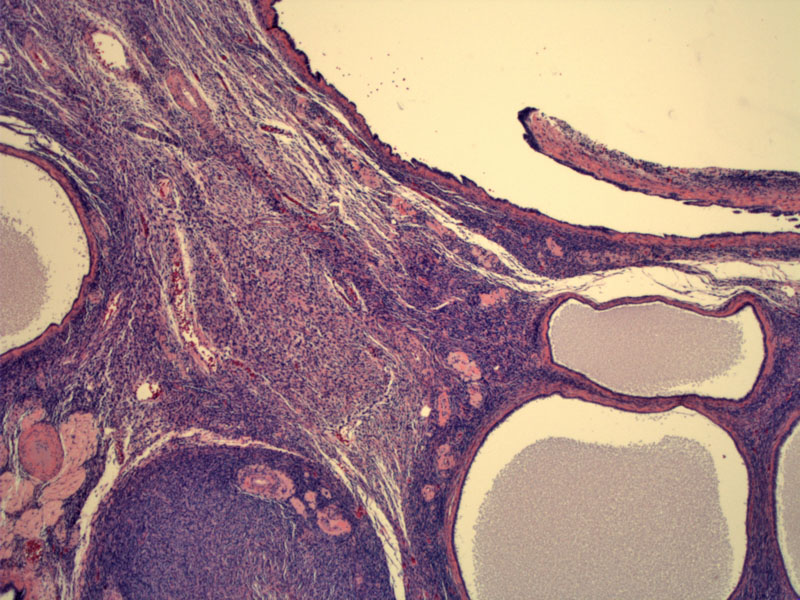 Glands are often cystically dilated and may have irregular contours.
IMAGE DESCRIPTIONS

Enlarged cystic glands lined by a single layer of ciliated epithelium in seen in the ovarian cortex.

The glandular lining consists of ciliated and secretory cells that recapitulate that seen in the fallopian tube. Note the presence of ciliated cells, some of which have pale pink abundant cytoplasm. Scattered lymphocytes are also seen in the lining.

Endosalpingiosis is the term used to describe benign glands lined by tubal epithelium that occur outside of the fallopian tube. They are very common findings and in one study, endosalpingiosis was found in up to 12.5% of surgically removed omenta.1 The frequency of endosalpingiosis is increased in patients with serous borderline tumors.

The origin of these glands are not clear. Several theories have been proposed including (1) mullerian differentiation or metaplasia of mesothelium; (2) implantation of sloughed tubal epithelium due to chronic salpingitis; (3) foci of borderline serous tumors implants that have undergone maturation.1,2

Occurs in reproductive age women as an incidental finding. Occasionally seen on radiographs as microscopic calcifications. This corresponds to frequently encountered psammoma bodies within the glandular lumina or in the adjacent stroma.

Most commonly found on the pelvic peritoneum covering uterus, fallopian tube and ovaries. Other sites include the pelvic parietal peritoneum, omentum, bladder and bowel serosa as well as in skin (especially in laparotomy scars).1