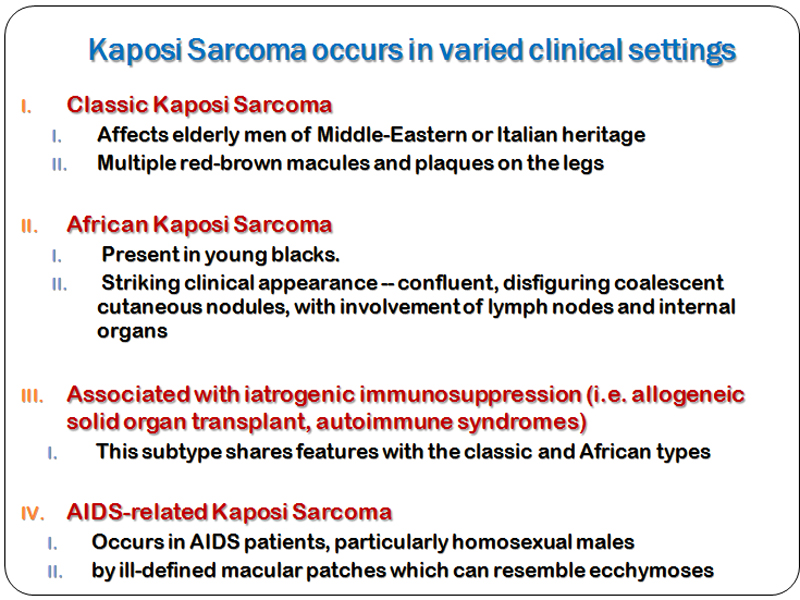 This image is typical of the early patch stage with subtle slit-like spaces, which can be difficult to distinguish from normal dermis.

A proliferation of vessels, forming slit-like spaces in the dermis.

Red blood cells can be seen within the lumina, as well as extrasvasated RBCS in the stroma.

Note the cellular appearance of the plaque stage, composed of spindle cells with mild to moderate atypia.

Yet another image of spindled endothelial cells and extravasated RBCs. It may be difficult to distinguish KS from angiosarcoma.

HHV-8 staining will secure the diagnosis. Most of the malignant spindled nuclei are strongly positive.

Kaposi Sarcoma is a primarily cutaneous vascular malignancy which occurs in various clinical settings (see below). It is most likely caused by the human herpes virus 8 (HHV-8). The histologic appearance is characterized by an early patch stage, later followed by a plaque stage.

The early lesion (patch stage) is comprised of small slit-like vessels dissecting through the collagen bundles in the dermis. As the lesion progresses, the vessels proliferate, become irregular in shape and may become solid areas of spindle cells. There may be a "promontory sign" in which endothelial cells and stroma project into a vascular space. Extravasated RBCs, occasional plasma cells, PAS positive hyaline globules representing degenerated RBCs are common accompanying features . The neoplastic endothelial cells will variably stain for CD31, CD34, factor VIII-related antigen and Ulex europaeus. A HHV-8 stain should be strongly positive. (Rapini, Busam).

The classic form usually takes on an indolent course and a good prognosis.