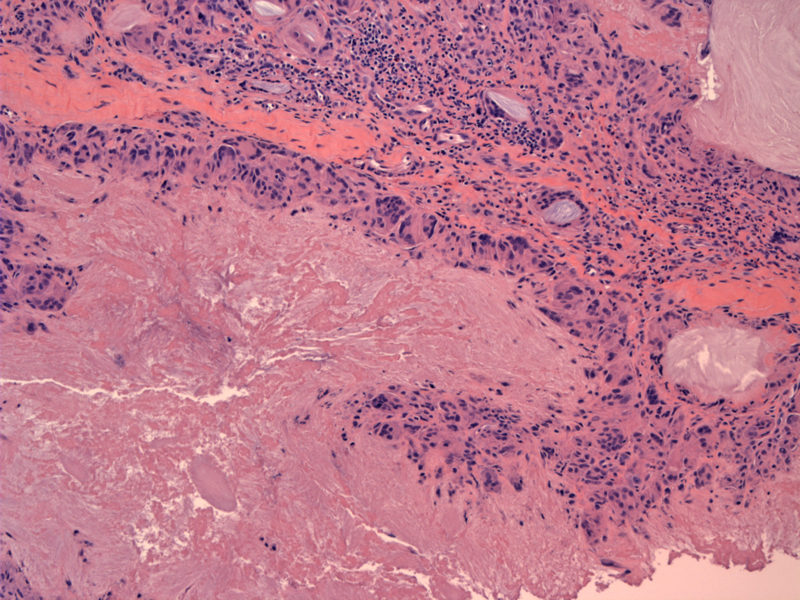 Case 1: The periarticular soft tissues are involved by amorphous pink deposits cuffed by a rim of plump histiocytic cells.

Giant cells are admixed with the histiocytes, which often form an undulating outline around the deposits. There is surprisingly limited chronic inflammation.

Crystals are present in the amorphous material, which cannot be appreciated on routine H&E. Polarized light may reveal blue refractile slender crystals. There is a distinctly fibrillar appearance to the deposits due to the crystals.

Slender needle-like crystals are seen in this joint aspirate.

A closer look at these deposits.

Multinucleated giant cells and histiocytes form a rim around the gouty material.

Hyperuricemia in conjunction with some poorly understood factors (genetics, etc) precipitates crystal deposition of uric acid in the soft tissues (including bursal sacs) around the joints, causing gout. Interestingly, not all those with elevated blood uric acid levels develop gout.

Acute attacks may eventuate in a chronic form of arthritis in which gouty tophi form and cause difficulty mobilizing the joint as well as pain.

Gouty arthritis is characterized by recurrent episodes of acute joint pain, tenderness and swelling, often occuring at night and in the big toe, although other joints are also frequently involved. Men are affected far more often than women.

Precipitating factors for an acute attack include alcohol, chemotherapy (resulting in rapid cell breakdown), thiazide diuretics, dehydration and low dose aspirin, among others.

Elevating the joint, and taking NSAIDS can help improve symptoms during an acute attack. Medications such as allopurinol act to decrease uric acid levels but are ineffective unless taken as preventative measure in chronic gouty arthritis.