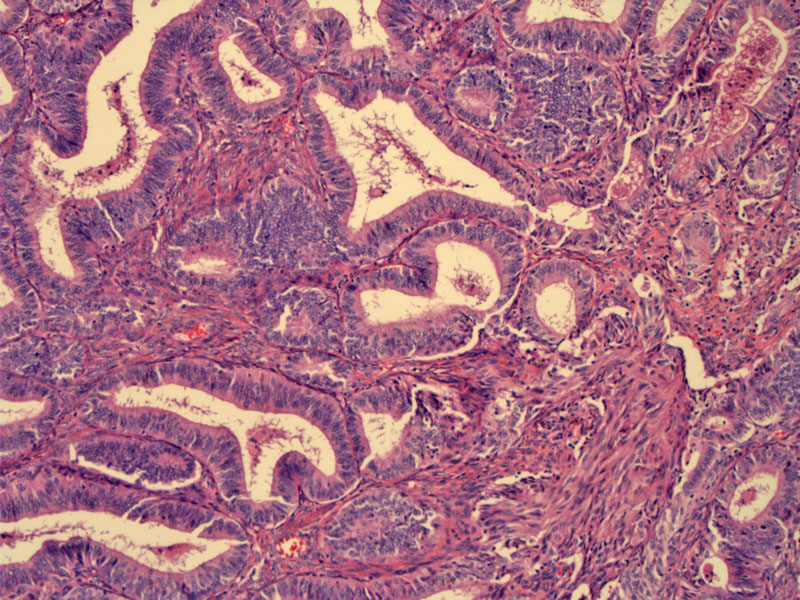 This is an example of low grade endometrioid carcinoma in the ovary. Tubular glands resembling endometrial glands exhibit crowding and infiltrate into the ovarian stroma. However, this tumor had less than 5% solid growth, thus, placing it in the FIGO grade I category.

Another area of the above tumor demonstrates a spindled pattern. Some epithelial cells appear fibroblastic and blend in almost imperceptibly with the spindled stromal cells.

A different case demonstrates a tubular pattern. The glands are variably sized with mild to moderate cytologic atypia.

A sertoliform pattern is seen this tumor. The tumor cells form trabeculae -- and small glandular lumens are seen within these broad branching cords. Variants of endometrioid adenocarcinoma may mimic sex-cord tumors such as a granulosa cell tumor and Sertoli-Leydig tumors of the ovary.

Occasionally squamous metaplasia may be encountered. The endometrioid carcinoma is relatively bland, and transitions to benign squamous cells.

This area of endometrioid carcinoma of the ovary shows some brightly eosinophilic secretions within the irregularly outlined gland.

Endometrioid adenocarcinoma is the second most common surface epithelial tumor of the ovary, following serous tumors. They are associated with endometriosis; up to one-third of these tumors arise within or adjacent to foci of endometriosis.1

The pattern of growth is usually papillary or glandular. Invasion can be seen as infiltration of the stroma OR confluent growth of glands. The glands are lined by endometrial-type epithelium. The cells are columnar with amphophilic cytoplasm and basally oriented round nuclei. FIGO grading (used in endometrial carcinomas) can be applied to these tumors. Grade I tumors have less than 5% solid growth; Grade II tumors have between 5-50% solid growth and grade III tumors have greater than 50% solid growth. There is a progressive increase in nuclear atypia and stratification as well from grade I to grade III lesions.

Foci of squamous differentiation (which can occasionally be malignant) may be seen in up to 50% of endometrioid adenocarcinomas. Variants of endometrioid carcinoma can mimic sex-cord tumors and make be difficult to distinguish histologically. IHC panels will be help in these situations. The more common variants include: microglandular, sertoliform and spindle cell.

Most often diagnosed in the 5th decade and beyond. May present with abdominal or pelvic pain. Vaginal bleeding can be seen if associated with concurrent endometrial carcinoma.

Similar to benign and borderline tumors, the tumor is typically solid with a tan-white cut surface. However, they are more likely to contain a cystic component and can be indistinguishable from serous carcinomas on gross inspection unless the tumor arises from a foci of endometriosis.

Treatment is as for epithelial ovarian cancers. This consists of complete surgical staging and tumor debulking with a total hysterectomy, bilateral salpingo-oophorectomy, pelvic lymphadenectomy, omentectomy, washings, and peritoneal biopsies of the pelvis, abdomen, and diaphragm. Optimal debulking consists of leaving no residual disease greater than 1 cm. Surgery is following with a platinum and taxane based chemotherapy regimen, Recurrences are treated with a diverse range of chemotherapy regimens, with platinum remaining the mainstay of therapy.

5-year survival is greater than 90% for those with low-grade, low-stage tumors (even with synchronous low-grade endometrial carcinomas in the uterus). However, for high-grade and high-stage tumors, prognosis is similar to that of usual (serous or mucinous) ovarian carcinomas.3

Endometrioid adenocarcionmas with a component of clear cell, serous or undifferentiated carcinoma has a poorer prognosis than 'pure' forms; and thus, must be reported in the diagnosis.