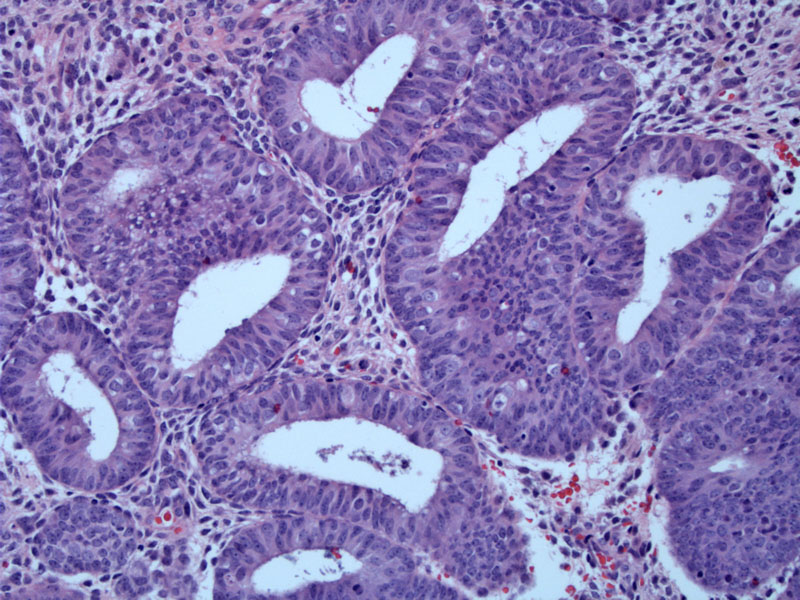 The glandular cells have enlarged vesicular nuclei that overlap haphazardly. The glands have irregular outlines and are closely spaced (increased gland to stroma ratio).

The WHO classification for endometrial hyperplasia is quite simple. The most important initial assessment is the presence of cytologic atypia followed by glandular complexity. Thus, the four categories are as follows:

Complex hyperplasia with atypia (CAH) is characterized by cytologic atypia in the background of complex, crowded irregular glands. Note that the nuclear atypia may be focal or diffuse. The cells demonstrate increased N/C ratios, loss of polarity, rounded nuclei (vs elongated nuclei seen in complex hyperplasia without atypia). Nuclear pleomorphism, nuclear hyperchromasia and prominent nucleoli are commonly seen.

It may be difficult to distinguish CAH from well-differentiated endometrioid carcinoma. In the latter, one should find foci of stromal desmoplasia, tumor cell necrosis and marked nuclear atypia. Also, the presense of back-to-back glands without intervening stroma is a helpful feature to diagnosis carcinoma.1

Aside from the WHO classification noted above, an alternative classification scheme has been proposed called the EIN (endometrial intraepithelial neoplasia) system. It has not been very popular, and so will only mention this briefly. The three categories under the EIN classification are: benign hyperplasia, EIN and carcinoma. This system uses a "D-score" which assess the percentage of stroma and nuclear variation. A low D-score is associated with clonality. Interestingly, most of CAH lesions fall under the category of EIN, so it appears there is agreement between the two classification systems.1,2

CAH is a premalignant lesion that may progress to endometrial carcinoma. Abnormal vaginal bleeding is the most common presentation.

Definitive therapy is with a total hysterectomy. It is important to note that at the time of diagnosis of CAH of the endometrium via sampling, a large percentage of patients will have concurrent adenocarcinoma on hysterectomy specimen. High dose progestins can be employed with acceptable response rates for women who desire to preserve fertility.