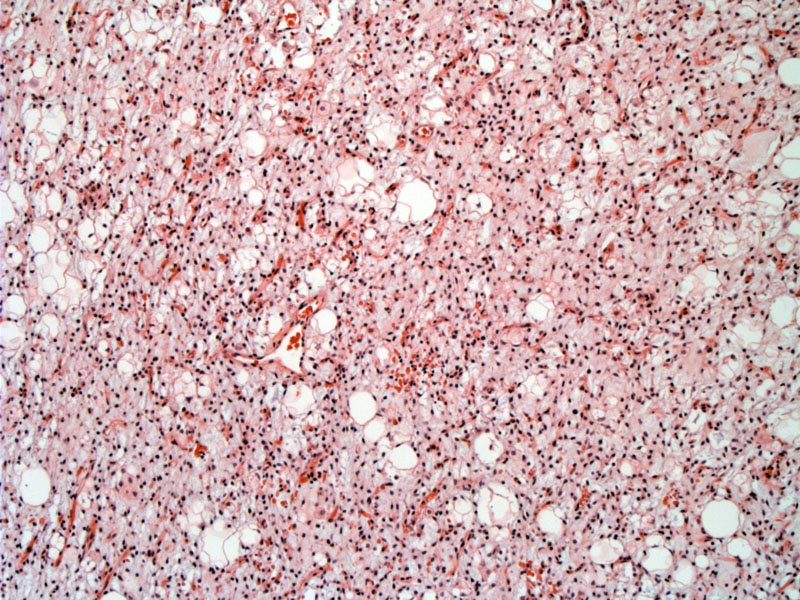 Histologically, lipoblastomas are composed of preadipocytes (spindled primitive mesenchymal cells with dark nuclei), lipoblasts and more mature adipocytes. The background stroma is myxoid, which can be quite abundant. This area of the lipoblast demonstrates a prominent proliferation of preadipocytes and scattered lipoblasts. Though not shown in this image, lipoblasts are generally lobulated, seperated by bands of fibrous stroma.

Preadipocytes (dark nuclei and spindled morphology) are admixed with lipoblasts (cytoplasm contains one or more large lipid vacuole) and small capillaries. Unlike myxoid liposarcoma, there is no nuclear atypia.

Lipoblastoma is basically the childhood equivalent of a lipoma. It comes in two forms: circumscribed (lipoblastoma) and diffuse (lipoblastomatosis). The circumscribed form is generally located in the superficial soft tissues on the upper and lower extremity. Lipoblastomatosis infiltrates the deeper tissues and has a greater tendency to recur. These lesions are generally benign and asymptomatic, however, in very rare instances, depend on the location and size of the tumor, it may compress critical structures such as the trachea or spinal cord.

Lipoblastomas also demonstrate a unique cytogenetic aberration at 8q11-13, resulting in rearrangement of the PLAG1 gene. Fusion genes such as HAS2/PLAG1 and COL1A2/PLAG1 have been identified. In contrast, myxoid liposarcomas have a characteristic t(12;16) translocation.1,2

Occurs almost exclusively in young children before the age of 3. Very rarely seen in adolescents and adults. The circumscribed form has an average diameter of 5 cm and is found on the limbs.2 The diffuse form is generally larger and occurs in the deeper tissues. Lipoblastoma and lipoblastomatosis have been documented in a wide range of anatomic sites such as head, neck, trunk and retroperitoneum.1

Excision with wide margins is recommended for the diffuse form of lipoblastoma.

Excellent prognosis as the entity is benign. Recurrences range from 9%-22% and are generally associated with the diffuse form. Very rarely, the lesion may impinge on critical structures such as the trachea and spinal cord.