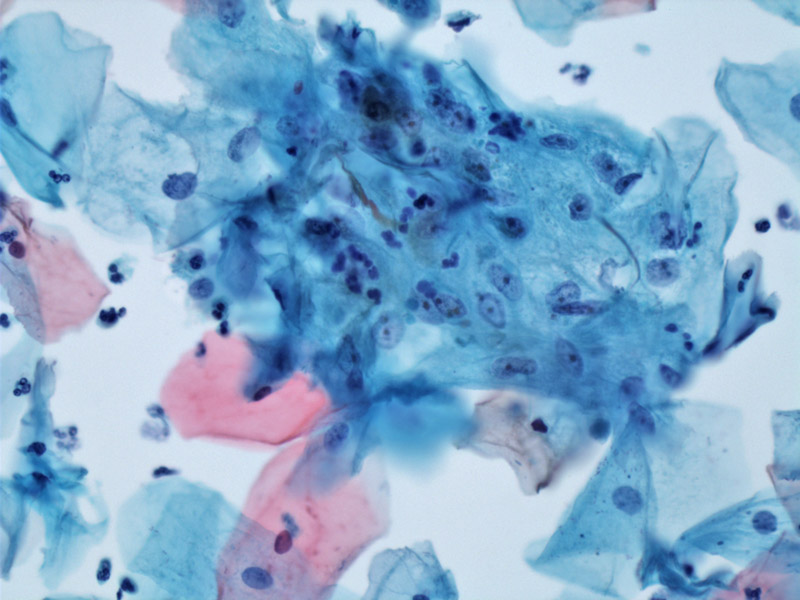 A syncytial sheet of cells are often found in the Pap smear.
IMAGE DESCRIPTIONS

A cohesive sheet of cells with ill-defined cell borders create a syncytial look -- note that despite the pleomorphic shape of the nuclei, they have pale fine chromatin with prominent nucleoli.

Streaming squamous cells with vesicular chromatin are admixed with neutrophils. The presence of inflammatory cells support a diagnosis of reparative atypia rather than malignant change.

Here is another image from a cytology specimen. Note that the streaming squamous cells do not overlap. The cells are spindled and the nuclei contain vesicular chromatin and uniform small discernible nucleoli.

Reparative changes in the cervix occurs as a result of mucosal injury such as previous biopsy, severe inflammation, etc. The cytologic features of repair can mimic dysplasia as well as carcinoma -- distinguishing between them can be a diagnostic challenge leading to false-positive (interpreted as SIL or carcinoma) or false-negative (interpreted as benign in the presence of SIL or carcinoma) diagnoses. Features such as enlarged nuclei, pleomorphism, prominent nucleoli and mitoses can be seen in both instances.

The cells of repair can resemble endocervical, squamous or metaplastic epithelium and are characterized by cohesive, orderly sheets of cells lined up in rows that appear to be “streaming” or resemble a “school of fish”. There should be no nuclear overlap or crowding. Single cells are usually absent, and if present are typically found adjacent to sheets of cells. In contrast, single cells are pervasive in cancer.

Nuclear atypia such as nuclear enlargement (usually less than 2 or 3 times the size of an intermediate cell), prominent nucleoli or macronucleoli, pleomorphism and multinucleation are seen in repair, however the chromatin is usually fine and pale. In contrast, cancerous cells have hyperchromatic nuclei with coarse chromatin. The N/C ratio of repair cells is preserved or slightly increased. Mitotic figures are seen as well but never atypical forms. A background inflammatory infiltrate is commonly present in repair and sometimes neutrophils can been seen within the cytoplasm.1

In reparative atypia, there ought to be some hint of maturation toward the surface. A Ki-67 stain can be helpful as staining should be limited to the lower third of the epithelium.3

Most common in younger women, usually postpartum, but it can be seen in older women such as after radiation therapy.1

Once the inflammation or infection is treated, a repeat smear should be performed to confirm a return to normal cytology.

Longitudinal studies have shown that women with cervical reparative changes have an increased risk of developing dysplasia.2

Reparative epithelium often forms a sheet or stream of spindled cells seen in both cytology and histology specimnes.

The nuclei often have uniform bland chromatin and discernible nucleoli.