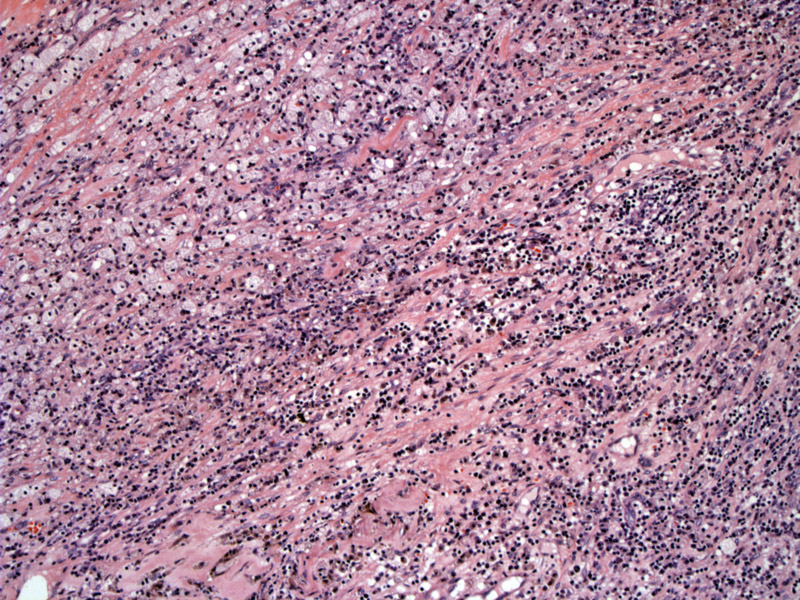 Foamy macrophages and a chronic inflammatory infiltrate are set in a fibrous background.
IMAGE DESCRIPTIONS

Classically, xanthogranulomatous pyelonephritis (XP) is described as having a zonal pattern consisting of a central nidus of necrotic debris and neutrophils, surrounded by foamy macrophages. The outer periphery demonstrates a fibroplastic proliferation as the body attempts to wall off the infection.1 In this image, all the elements are present and admixed. Foamy macrophages are set in a background of fibrosis and chronic inflammation.

A multinucleated giant cell is adjacent to a cholesterol cleft. The background consists of a mixture of foamy macrophages, lymphocytes, plasma cells and fibroplastic proliferation (best seen on the lower left corner). If prominent, the fibroplastic proliferation may occasionally be mistaken for a sarcoma or sarcomatoid carcinoma, however, the latter entities would demonstrate nuclear atypia and mitoses which are not present in XP.

A higher power image demonstrates how one can conceivably confuse this entity with clear cell RCC. However, the delicate vascular network of RCC is not found, and these Image

Xanthogranulomatous pyelonephritis (XP) is uncommon form of chronic pyelonephritis that may mimic renal cell carcinoma grossly and histologically. It is generally caused by obstruction, suppurative pyogenic infection secondary to infection by Proteus mirabilis or E. coli. Formation of a staghorn calculi is present in 70% of cases.1

Grossly, yellow (xantho = yellow) nodular masses are found either diffusely or focally in the renal parenchyma, variably replacing the pelvis, pyramids and cortex. Unlike most solid kidney tumors, however, XP does not form well-circumscribed mass, but looks more "infiltrative".

As pyelonephritis and formation of staghorn calculi preferentially affects females, so does xanthogranulmatous pyelonephritis (F:M ratio of 2:1). Patients present with fever, pyuria and flank pain. Usually, a single kidney is affected and ultimately destroyed by the infection.

Nephrectomy; the kidney is usually nonfunctional and imaging may be concerning for neoplasm.