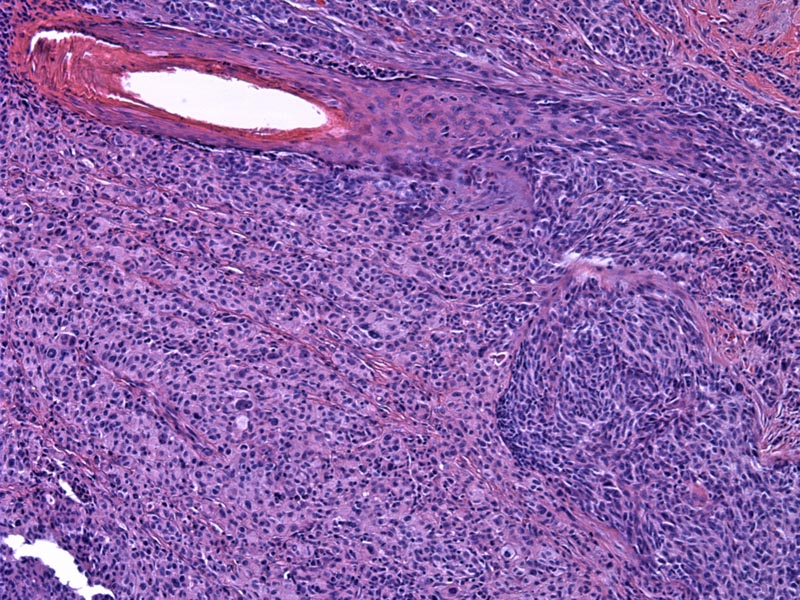 Melanomas in the sinonasal tract have a wide range of morphologies, similar to melanoma in the skin, depicted here. They can grow in sheets, nests, cords or interwoven bundles. Here, the tumor cells are growing in broad trabeculae with scant intervening stromal fibroblasts

Normal respiratory epithelium overlies a vigorous lymphocytic infiltrate, which overlies the melanoma. At this power it is difficult to separate the lymphocytes from the melanoma.

Malignant melanocytes with a smattering of pigmentation are clearly evident, and are less atypical than those seen in the skin. A hint of

A higher power image reveals the granular brown pigment within the melanocytic cells. Some cells with pigment have smaller nuclei consistent with macrophages.

A different case shows a significant infiltration by small round blue cells replacing the normal sinonasal submucosa. There is, again, no distinct architecture to the growth pattern.

The respiratory mucosal surface is present in the right portion, with the melanoma undermining the mucosa.

Strong staining for S-100 highlights the melanoma from the prior, lower power, H&E image.

Rare tumor, less than 1% of all melanomas.

Affects males and female equally, commonly in the 5th to 8th decades. Increased incidence in Japan. Presents with nasal obstruction, nasal discharge, epistaxis and pain. The polypoid lesion may be white, gray, brown or black.

Poor. Overall 5 year survival is 17 to 47% (1). Depth of invasion is not a prognostic factor in the sinonasal; outcome depends on tumor size, age of patient, vascular invasion and mixed anatomic site