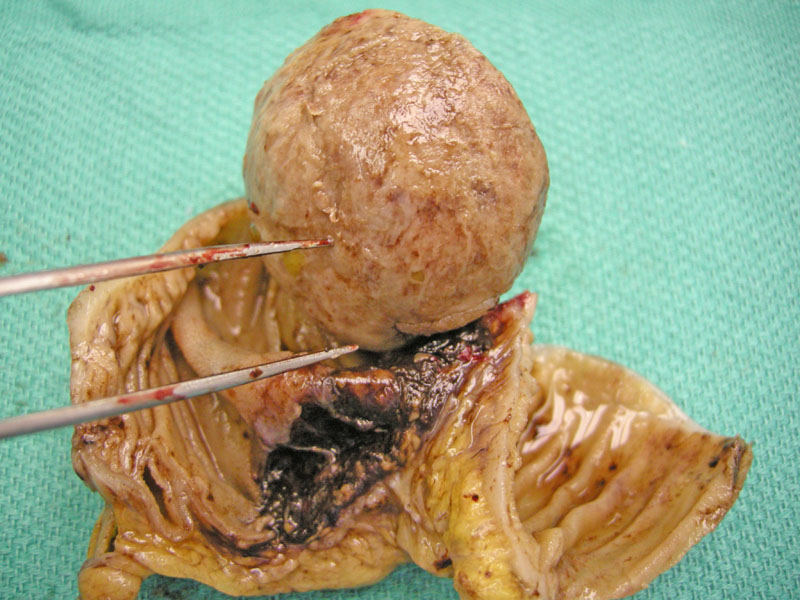 This segment of duodenum contains an inflammatory fibroid polyp (IFP) that consists of a bulky exophytic solid mass occluding the lumen Most IFPs are located in the stomach or small intestine.

The cut surface of the polyp shows a pedunculated solid tan nodule with a fibrous appearance, devoid of features suggestive of tumor necrosis.

The surface of the polyp is denuded and replaced by a lining of fibroinflammatory exudate.

Underneath the surface a spindled appearance is evident.

Most of the lesion apart from that under the eroded surface shows a loosely textured background with scattered lymphocytes and a few eosinophils.

Inflammatory fibroid polyps (IFP) are benign submucosal polyps composed of a mixture of bland spindle cells, inflammatory cells and blood vessels. Antiquated terms used for this entity include Vanek polyps, gastric submucosal granuloma with eosinophilic infiltrate, eosinophilic granuloma and submucosal fibroma, names which all describe various features of this tumor. The pathogenesis of this tumor is unclear, but some authorities favor a reactive process in response to an irritant, although this irritant remains unidentified (Sternberg, Iacobuzio-Donahue).

Microscopically, IFP is a proliferation of spindled or stellate stromal cells; the stroma may be edematous or myxoid in areas. Intimately admixed are inflammatory cells composed of eosinophils, lymphocytes, plasma cells, macrophages and mast cells. Classically, a predominance of eosinophils has been described, but their numbers can range from few to many. There is often a prominent vascular component to the tumor, with "onion-skinning" or "rarefaction" surrounding the larger vessels (Sternberg).

Grossly, they are solid tan-yellow submucosal polypoid masses; the overlying mucosa may be eroded and ulcerated. Sizes range from 1.5 to 13cm, but polyps up to 20cm have been reported. Depending on location and size of the polyp, symptoms may vary ranging from asymptomatic to obstructive symptoms such as pain, nausea and vomiting.

A review of 1000 IFP conducted by Wysocki (2007) revealed that 70% were located in the stomach, 23% in the ileum, 4% in the colon and rectum, 1% in the gallbladder, esophagus, duodenum and appendix. The case report that prompted this large review was a 53 year old woman who presented with biliary obstruction; imaging revealed a 2.4 cm IFP situated adjacent to the ampulla of Vater which compressed the head of the pancreas (Wysocki).